So I went through an indie nail polish phase a couple of weeks ago. Mostly this consisted of purely virtual hoarding– my Amazon “Nails” wish list swelled to 214 bottles. I managed to contain myself from that level of indulgence. But I couldn’t resist making a couple of actual buys.

I’m into the whimsy and complexity you see coexisting in a lot of indie lacquers– the candy-pastel colors, confectionary glitter suspended in a jelly base. So many of them look genuinely edible. So I was glad to see an indie polish hawker apparently really embracing that patisserie aesthetic.

Just from the name of her shop, I’d totally want to be friends with TheHungryAsian’s proprietress, Kae. Selling through Etsy, she makes “hand mixed glitter polishes” that tend toward cotton candy colors, with discrete, dispersed dots of glitter that look like cupcake sprinkles. My pick was a bit of an outlier among all those Easter egg shades– appropriately called Strawberry, it’s a “red creme polish with sparse black microglitter”.

Availability: $4.50 from TheHungryAsian on Etsy

Strawberry is a warm-toned Maraschino cherry red with a standard cream finish– it looks far less jellied on my nails than it does on TheHungryAsian’s virtual storefront. The microglitter is very fine and reads matte. It’s low-key enough that I can’t detect it all all when my hand’s held at arm’s length– but then, my glasses are frequently smudged and my prescription unusually terrible. For the most part I appreciate the subtlety. You don’t get the lumpy texture of the more assertive glitter polishes, or that tendency for the sparkle of slough off. But on the flip side, it means that Strawberry reads like a standard red cream under many lighting conditions (or with deficiencies of observational skill).

The formula is a good one. Strawberry applies beautifully, with a smooth and even texture. It was more-or-less opaque with one coat, although I applied a second– for the ritual of it, and also in the hopes of fishing out more of that elusive glitter. It does seem to chip more readily than the most bulletproof of my polishes– even with a topcoat. But it’s not nearly as frail as the flimsiest lacquers in my stash.

I’ve got no problems with the brush, which is reasonably stiff and fans out nicely for even coverage of the nail bed– I found myself peeling far less polish off my cuticles then usual, post-application. I also have to say a word about the packaging, which is adorable– a heart-shaped bottle, with a clear prismatic jewel set on top of the brush handle. It’s even got a label like a valentine, with a little cartoon strawberry. 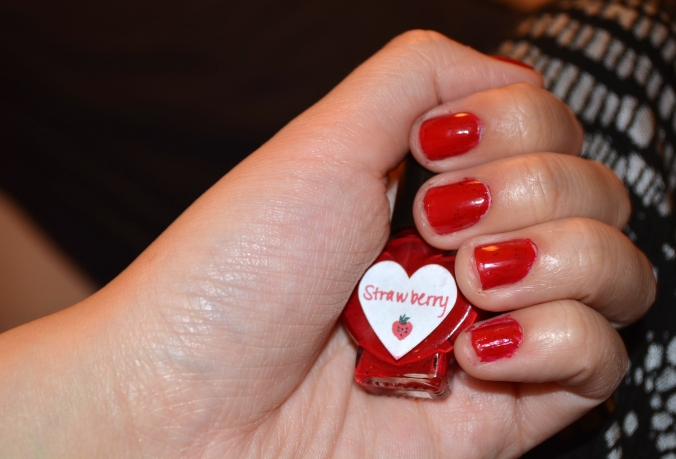